Start a Wiki
Unko Tin Tin (ウンコティンティン) is the guardian of Faudo's Esophagus. It makes any passerby answer its riddles, giving the wrong answer will result in being dropped into Faudo's stomach acid. He seems to be infatuated with Megumi, but he is jealous while he despises Kiyomaro for saying he can't do a simple six digit multiplication problem while still thinking that Megumi likes him ,  which is Really true. When Faudo is revived, Unko Tin Tin transforms and gains several powerful abilities. In the manga, he fights against Wonlei, initially beating him because Wonrei did not have Li-Yen with him and was unable to use any spells.

1 of 2
Add photo
Eventually, Li-en shows up from behind a wall and helps Wonrei fight by using the spells that Wonrei tells her to use. Picking up on this, Unko Tin Tin starts telling Li-Yen to cast Wonrei's spells at inoppurtune times, but he will regain the upper hand. Then she realizes that by picturing Wonrei in her mind, he will be seen. At the end of the fight, Unko Tin Tin self-destructs in an attempt to kill Wonrei, Megumi, Tia and Li-en .

His attempt fails because Megumi and Tia burn Wonlei's book, but he will be sent back to the Mamodo world before he dies. This does not happen in the anime. Instead, Unko Tin Tin is hit with one of Bari spells and falls into Faudo's stomach acid.

Despite not being mentally sane in any way, shape, or form, Unko Tin Tin is a very powerful fighter in his own right. Although his abilities are also quite strange, like Unko Tin Tin, they are very powerful. 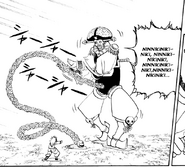 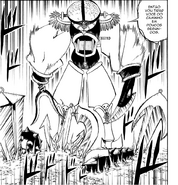 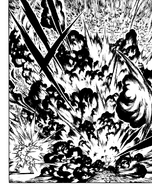 Suicide Bomb
Add a photo to this gallery

Retrieved from "https://zatchbell.fandom.com/wiki/Unko_Tin_Tin?oldid=42740"
Community content is available under CC-BY-SA unless otherwise noted.