Mr. Dancho (real name unknown in the original Japanese release) is the ringleader (サーカスの Sākasu no Danchō) of Mr. Dancho's Traveling Big Top (オロロン・サーカス Ororon Circus in the Japanese version). While Parco Folgore was signing autographs to women surrounding him, Dr. Dancho kidnaps Kanchomé by luring him into his moving truck with a basket of candy and locked Kanchomé in his truck by dropping bars. Parco Folgore tries going after the truck when he noticed Kanchomé being taken away.

Kanchomé's second performance was juggling clubs. The clown next to him juggled his set well but Kanchomé fails juggling his club and hits the ringmaster and the clown but the audience still goes wild, cheering for the humanoid duck mamodo. Despite that, Kanchomé runs off stage crying since he misses Folgore. Mr. Dancho enters Kanchomé's room and dismissed Kanchomé for the day since there wasn't enough crowd to entertain for a second performance and because Kanchomé did well enough. 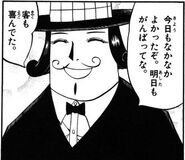 The ringleader in the manga.
Add a photo to this gallery
Retrieved from "https://zatchbell.fandom.com/wiki/Mr._Dancho?oldid=36533"
Community content is available under CC-BY-SA unless otherwise noted.