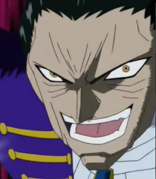 Demolt (デモルト, Demoruto) and Roberto Vile (ローベルト・ヴァイル, Rōberuto Vairu) are the final Ancient Mamodo/human team that Zatch, Kiyo and their friends face. Demolt is the last and most powerful of the Four Supreme Mamodo from a thousand years ago, and was nicknamed the "Crazed Warrior Berserker" because of his massive size and power. His spell powers revolve around the claws on his hands, one of his spells allows him to use them as a handheld weapon. However, Demolt is not very intelligent; his power as a servant of Zofis comes from his bookkeeper, Roberto Vile, whose mind is not controlled and who plans to use the Stone of Moonlight to control the minds of humans after Zofis becomes king. Demolt, after having his true self awakened, becomes annoyed with his bookkeeper and swallows him becoming more powerful. Zatch, Kiyo and his friends eventually use teamwork and Zatch's new spell to defeat him, and Wonrei makes the final attack that burns Demolt's book. Fearful for his life, the agitated Vile runs away shortly afterward.

While being controlled by Zofis, Demolt is the guardian of the Moonlight stone, which let Zofis control human minds. During the fight, Penny helps the team to defeat him and destroy the Moonlight stone with her So Giaku spell, but her spellbook is also burned in the process.

After the battle with Clear, Demolt is seen having a happy life in the Mamodo World.

Penny, at the Devolo Ruins (episode 82)

Byonko, at the Devolo Ruins (episode 82)

Retrieved from "https://zatchbell.fandom.com/wiki/Demolt_and_Roberto_Vile?oldid=42324"
Community content is available under CC-BY-SA unless otherwise noted.